Millions of kids have recently started going to school worldwide, about 10% of them suffering from dyslexia.

As the year unfolds, some parents of first and second graders will see for the first time the written text that their son or daughter has just written, and will ask themselves “ What is this? What gibberish has my son or daughter produced?”

For some of these parents this will be the first indication of their child’s writing disability, and their initiation as dyslexic parents…

As a lifelong dyslexic and a dyslexia advocate, I would like to provide these parents my non-scientific definition of  “dyslexia spelling” – spelling produced by dyslexics…

What is Phonetic Spelling?

When you’re dictating a word and tell your son or daughter that he should write what he hears, a child, including a dyslexic, will attempt to map the sounds in the words to the sounds of the letters.

However, English is not a phonetic language. There are a very large number of English words where there is a gap between how the word sounds and how the word is actually spelled. Not to mention, there are many times multiple correct phonetic options to a sound (for example: k , c, ck, and qu all sound about the same)…

What is Creative Spelling?

But people with dyslexia, have very poor and consistent visual memory of spelled words, and therefore can hardly rely on their visual memory of words.  (see my example of how I spell the word “unfortunately” in a previous Ghotit Post – My Dyslexia and Phonological Processing.)

Not to mention that dyslexics sometimes simply confuse the direction of letters, and though they meant to write the letter “b” actually end up writing the letter “d”…

I term all the above spelling challenges as “creative spelling”. It is “creative” in the sense, that given that a person simply has no idea of how to spell correctly certain syllables of a word, he creatively makes them up as he writes. And each time he “creates” a word’s spelling, it usually ends up as a different spelling creation.

If English was a phonetic language, then regular spell checkers who have implemented phonetic spelling rules would probably provide some value for dyslexics with poor visual spelling memory…

However, English is not a phonetic language, and therefore the “creative spelling” of a person with dyslexia must be taken into account in a spell checker. However the “creative” spelling of a dyslexic is basically “noise” and therefore any computerized program, such as a regular spell checker, that tries to correct a single word at a time (and not based on the context of the sentence) is doomed to fail… That is why Microsoft spell checker many times simply fails to correct a heavily misspelled word written by a dyslexic.

Here is where benefits of a context spell checker such as Ghotit’s Contextual Spell Checker come to play. Context-based spell checkers not analyze directly the “creative spelling” of each word written by a dyslexic, but rather based on the context of what was written, intelligently offers corrections, predicting what was actually intended to be written.

Seeing Your Dyslexic Child’s Writing For The First Time was last modified: March 19th, 2022 by admin

Studies show that education pays off in terms of employment and earnings.

Here is a study produced by the US Bureau of Labor Statistics that clearly demonstrates that a higher education, on average, pays off: 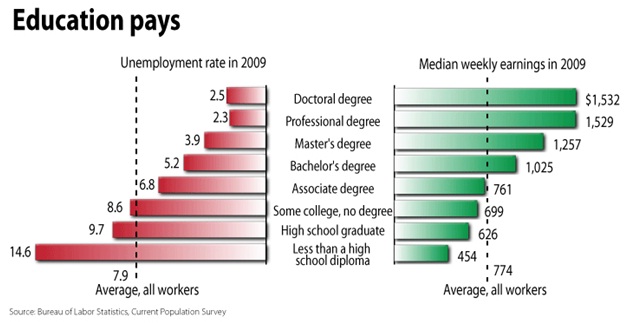 The graph above demonstrates that there is a strong positive correlation between education and income; and a strong negative correlation between education and unemployment. In order words, a person with a higher education, on average, will have higher earnings, and less probability to be unemployed then a person with a lower education. The statistics displayed above are true, on average, for the entire population.

However, do these same statistics apply for people with dyslexia?
I believe not…

I remember reading in the past a UK study that claimed that the gap of unemployment between a person with dyslexia and without dyslexia rises with increased education (sorry – could not find the link of the study – if anyone can help let me know). In many ways these findings make sense. Dyslexics receive support from their families and teachers and government aid during their school years, to ensure their academic success. But, once they leave the school gates, they are usually left alone with their reading and writing disability.

In many countries there is already a high awareness to learning disabilities and dyslexia, with government aid being offered (e.g. Individuals with Disabilities Education Act (IDEA)). These government intervention projects provide proactive aid to dyslexic students to graduate from high schools and universities. However, there is minimal or no official support offered to graduating dyslexics, promoting those same people who were aided in schools, to obtain and maintain a job.

This information presents a real challenge for educators and decision makers. In order to help people with dyslexia to succeed in life, on one hand education assistance is required. But on the other hand proactive aid should be offered assisting a dyslexic to obtain and maintain a job.

Only then can education really pay off for dyslexics too.

Would love to get your inputs…

Does High Education Pay Off for People with Dyslexia? was last modified: March 19th, 2022 by admin